200 lines of python code to demonstrate DQN with Keras

This project demonstrates how to use the Deep-Q Learning algorithm with Keras together to play FlappyBird.

This article is intended to target newcomers who are interested in Reinforcement Learning.

(Update : 13 March 2017, code and weight file has been updated to support latest version of tensorflow and keras)

lib.cnmem=0.2 means you assign only 20% of the GPU’s memory to the program.

If you want to train the network from beginning, delete “model.h5” and run qlearn.py -m “Train”

What is Deep Q-Network?

Deep Q-Network is a learning algorithm developed by Google DeepMind to play Atari games. They demonstrated how a computer learned to play Atari 2600 video games by observing just the screen pixels and receiving a reward when the game score increased. The result was remarkable because it demonstrates the algorithm is generic enough to play various games.

Let’s go though the example in qlearn.py, line by line. If you familiar with Keras and DQN, you can skip this session

The code simply does the following:

The idea is quite simple, the input is a_t (0 represent don’t flap, 1 represent flap), the API will give you the next frame x_t1_colored, the reward (0.1 if alive, +1 if pass the pipe, -1 if die) and terminal is a boolean flag indicates whether the game is FINISHED or NOT. We also followed DeepMind suggestion to clip the reward between [-1,+1] to improve the stability. I have not yet get a chance to test out different reward functions but it would be an interesting exercise to see how the performance is changed with different reward functions.

Interesting readers can modify the reward function in game/wrapped_flappy_bird.py”, under the function **def frame_step(self, input_actions) 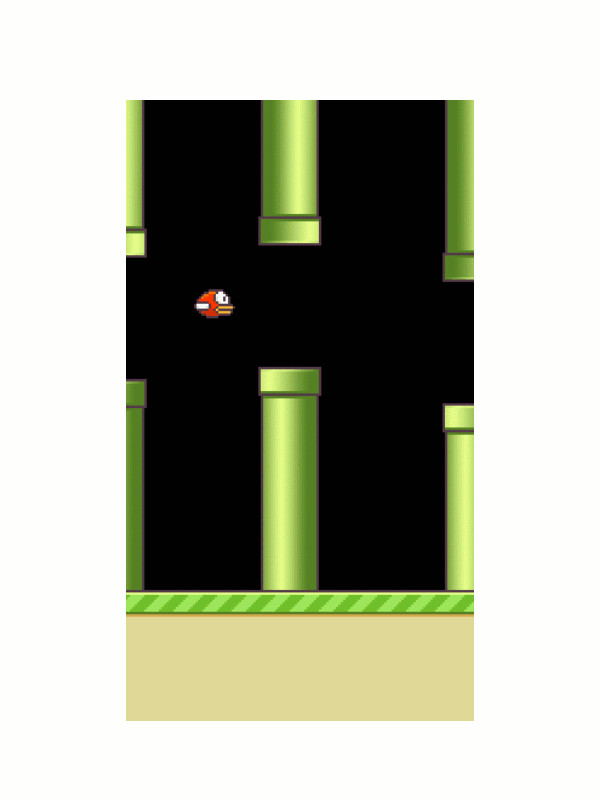 In order to make the code train faster, it is vital to do some image processing. Here are the key elements:

Why do I need to stack 4 frames together? This is one way for the model to be able to infer the velocity information of the bird.

So wait, what is convolution? The easiest way to understand a convolution is by thinking of it as a sliding window function apply to a matrix. The following gif file should help to understand.

You might ask what’s the purpose the convolution? It actually help computer to learn higher features like edges and shapes. The example below shows how the edges are stand out after a convolution filter is applied 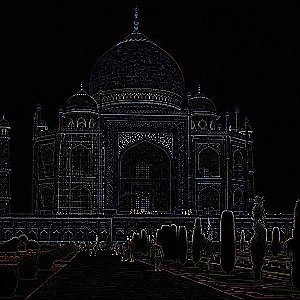 Keras makes it very easy to build convolution neural network. However, there are few things I would like to highlight

A) It is important to choose a right initialization method. I choose normal distribution with

D) We have used an adaptive learning algorithm called ADAM to do the optimization. The learning rate is 1-e6.

Finally, we can using the Q-learning algorithm to train the neural network.

REPEAT : Q(s, a) representing the maximum discounted future reward when we perform action a in state s

You might ask 1) Why Q-function is useful? 2) How can I get the Q-function?

Let me give you an analogy of the Q-function: Suppose you are playing a difficult RPG game and you don’t know how to play it well. If you have bought a strategy guide, which is an instruction book that contain hints or complete solutions to a specific video game, then playing that video game is easy. You just follow the guidiance from the strategy book. Here, Q-function is similar to a strategy guide. Suppose you are in state s and you need to decide whether you take action a or b. If you have this magical Q-function, the answers become really simple – pick the action with highest Q-value!

Here, represents the policy, which you will often see in the ML literature.

How do we get the Q-function? That’s where Q-learning is coming from. Let me quickly derive here:

But because our environment is stochastic, we can never be sure, the more future we go, the more uncertain. Therefore, it is common to use discount future reward instead

which, can be written as

therefore, we can rewrite the Q-function as below

We could now use an iterative method to solve for the Q-function. Given a transition , we are going to convert this episode into training set for the network. i.e. We want to be equal to . You can think of finding a Q-value is a regession task now, I have a estimator and a predictor , I can define the mean squared error (MSE), or the loss function, as below:

Given a transition , how can I optimize my Q-function such that it returns the smallest mean squared error loss? If L getting smaller, we know the Q-function is getting converged into the optimal value, which is our “strategy book”.

Now, you might ask, where is the role of the neural network? This is where the DEEP Q-Learning comes in. You recall that , is a stategy book, which contains millions or trillions of states and actions if you display as a table. The idea of the DQN is that I use the neural network to COMPRESS this Q-table, using some parameters (We called it weight in Neural Network). So instead of handling a large table, I just need to worry the weights of the neural network. By smartly tuning the weight parameters, I can find the optimal Q-function via the various Neural Network training algorithm.

where is our neural network with input and weight parameters

Here is the code below to demonstrate how it works

If you examine the code above, there is a comment called “Experience Replay”. Let me explain what it does: It was found that approximation of Q-value using non-linear functions like neural network is not very stable. The most important trick to solve this problem is called experience replay. During the gameplay all the episode are stored in replay memory D. (I use Python function deque() to store it). When training the network, random mini-batches from the replay memory are used instead of most the recent transition, which will greatly improve the stability.

There is another issue in the reinforcement learning algorithm which called Exploration vs. Exploitation. How much of an agent’s time should be spent exploiting its existing known-good policy, and how much time should be focused on exploring new, possibility better, actions? We often encounter similar situations in real life too. For example, we face on which restaurant to go to on Saturday night. We all have a set of restaurants that we prefer, based on our policy/strategy book . If we stick to our normal preference, there is a strong probability that we’ll pick a good restaurant. However, sometimes, we occasionally like to try new restaurants to see if they are better. The RL agents face the same problem. In order to maximize future reward, they need to balance the amount of time that they follow their current policy (this is called being “greedy”), and the time they spend exploring new possibilities that might be better. A popular approach is called greedy approach. Under this approach, the policy tells the agent to try a random action some percentage of the time, as defined by the variable (epsilon), which is a number between 0 and 1. The strategy will help the RL agent to occasionally try something new and see if we can achieve ultimate strategy.

I think that’s it. I hope this blog will help you to understand how DQN works.

My training is very slow

You might need a GPU to accelerate the calculation. I used a TITAN X and train for at least 1 million frames to make it work

I believe the questions are still not resolved and it’s an active research area in Machine Learning.

This work is highly based on the following repos:

I must thank to @hardmaru to encourage me to write this blog. I also thank to @fchollet to help me on the weight initialization in Keras and @edersantana his post on Keras and reinforcement learning which really help me to understand it.